Six of the fifteen stations of the geodetic vertices are situated in the Kautokeino Municipality, while Nuhpealáš is located on the border between Alta and Kautokeino. Luvddiidčohkka is selected as representative points of World Heritage Struve Geodetic Arc.

There were 732 inhabitants in Kautokeino in 1845, of which 85 were permanent residents. The permanent residents lived in Ávži and Kautokeino. The majority were of Kven and Sami origin and had government jobs like schoolteacher, tenant farmer, churchwarden, coachman, district sheriff, cantor or mail carrier. In addition, they did vegetable gardening, hunting and gathering and freshwater fishing, which gave opportunities to trade their commodities for reindeer meat. 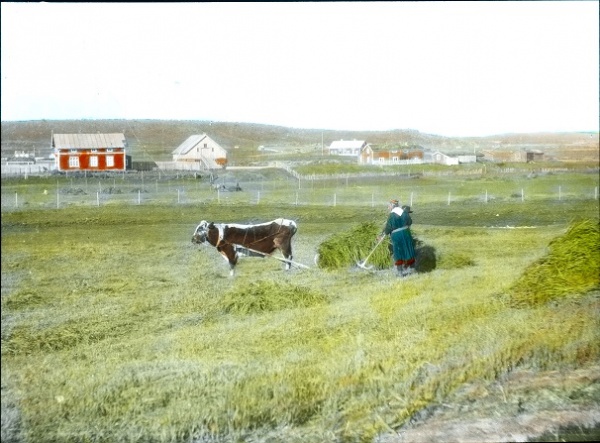 From Ávži in the 1920s. The Norwegian Mapping Authorities

Kautokeino had three public buildings: the church, the rectory and the school. The shopkeeper Ruth established a guesthouse in 1845. Previously, he had been employed at the Klerck business in Bossekop.

Leoni d'Aunet described the place after a visit in September 1838: "The town of the Lapps – if you can call this place a town – the place is not even a proper village - just a small cluster of ten or twelve farmhouses and about twenty barns. These barns, built on four stone pillars, are used by the nomad lapps to store fodder, food and clothing ..." She continues the description: "... the little red wooden church on the hill, and below it, the small sod-roofed houses on their pillars, resemble huge beehives. Down on the plain, hay was hung on hay-drying racks. The river formed a bend and ran around the settlement as a glittering silver band ...”

Logbooks and reports from the surveyors contain no information on who they met. The Swedish surveyors arrived in the village in August 1845, and the Norwegians came a little later. Lundh used the mountain lodge in Suolovuobme, the vicarage and the church as bases for barometer measurements. They probably stayed at the schoolmaster’s house. Selander and Lilliehöök recommended that Klouman and Lundh relied on the resident Sami as guides to Bealjášvárri and Ádjit.

The Church in Kautokeino 1896. The Norwegian Mapping Authorities

At this time, there were people who provided transport in Kautokeino. If the surveyors traveled parts of the route on the Alta River, as the 1846 barometer logs indicate, they must have hired riverboats, punters and carriers. More locals were probably engaged as guides and coachmen for the surveyors travelling from Kautokeino to Karesuando in 1845. 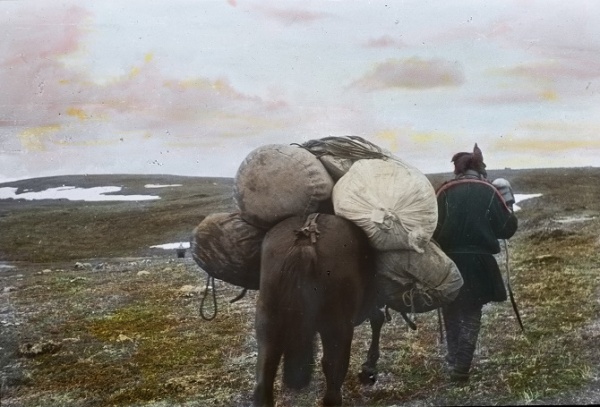 1800 century transportation between Alta and Kautokeino,summertime. The Mapping Authorities