In the mid-1800s, Hammerfest was a young town with 927 inhabitants and extensive contact with the outside world. During the summer months, the docks were teeming with life. A large part of Western Finnmark trade went via Hammerfest, but more than anything it was the Pomor trade that provided a livelihood for the town’s merchants. The harbour saw sailing ships from England, Germany, Denmark and Russia. Hammerfest equipped ships for Greenland shark fishing, and seal and polar bear hunting. 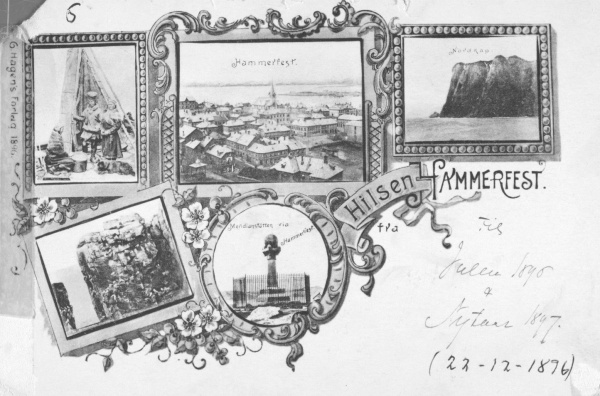 Postcard from 1897. Hammerfest historielag. The Museum of Reconstruction

In the wintertime, the town was marked by isolation. During these months, merchants often travelled both within and outside the country. Those who stayed behind in the town enjoyed a social life. During the summer months there were also parties and entertaining, described in the travelogues of Arthur de Capell  Brooks, and also mentioned by Lindhagen, who performed astronomical observations at Fuglenes in 1850. In his report to Struve, he asserted that no extraneous factors influenced his work.

Declining production at the Kåfjord Mines during the 1840s caused many people to go to Hammerfest and settle there. They sought work as day labourers, seal and polar bear hunters, cod liver oil workers and craftsmen. One sixth of the town’s residents were Kvens of Finnish origin.

The surveyors first came to Hammerfest in 1845. The town had a new church, a hospital on leased premises and a school with a permanent teacher for the bourgeois children during the day and the children of peasants and workers in the afternoons. In his 1850 report, Lindhagen wrote to Struve that the town had almost no vegetation, there were no reindeer, and the only way to make a living was trade and fishing. Leoni d'Aunet was in town in 1838, and she describes "civilization's last frontier" in more depth. "The houses are ochre-coloured, and of the 60 there are only a dozen that are proper houses. The houses have two rooms, one serves as kitchen, living room and dining room, where one wall is occupied by a large, primitive granite fireplace, while the other room serves as bedroom for the entire family, even the servants, and wardrobe and pantry. In addition, there are four white-painted two-storey houses with blue or green mouldings, where merchants – the town’s aristocracy – live. " 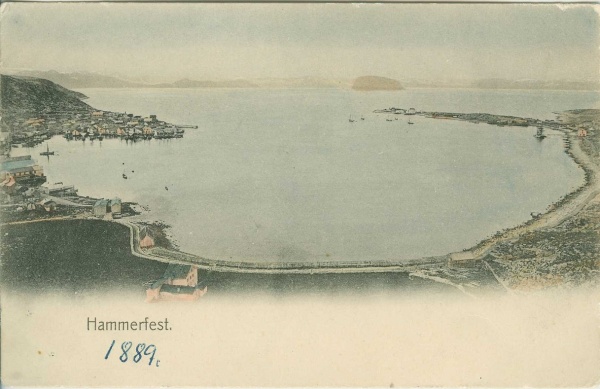 The harbor of Hammerfest in 1889. Hammerfest historielag. The Museum of Reconstruction.

C. Robertsen of Glasgow had set himself up at Fuglenes. He came to Finnmark as a clerk for the Woodfall and Crowe Company (Kåfjord Mines) in 1827. He obtained a trade licence in 1836. He bought the properties at Fuglenes from Crowe the year after. Lindhagen wrote that the astronomical instruments were stored at a merchant’s at Fuglenes in the summer of 1850. During this period, the observatory was built, and they left Hammerfest for further surveying at Alta. The merchant in question was probably Robertson. Another important name in town at this time was the social developer Iver C. Rostad. Visitors often took lodgings in his hostel, and Lund undertook barometer measurements from the upstairs rooms in Rostad's house in 1846. Unfortunately, there are no good descriptions of the town in the Struve expedition logbooks. Read more here.